Crossing over the Hump

Posted on November 6, 2012 by adventureamericas

Living around the drastic scenery of the places we call home, Moab, Utah and Jackson, Wyoming you begin to take for granted the striking image of the rugged pine green, snow white and granite mountains or the tall sandstone towers protruding against the blue sky in the distance.   It is only upon leaving that you again begin to look upon these images through the awed eyes of a first time visitor.

Jed and I entered Ecuador feeling a little road weary. After more than six months on the road, we were tired of eating rice and were feeling the pangs of hunger for some good ole’ American food.  We were missing our family and friends and the familiar playgrounds of the Teton Mountains and the towers, buttes and canyons of the Utah desert.

It is somewhat unfair when comparing other locations to these places, but in truth I feel that anyone must feel this way about their home after they have left there for a while because it is not just scenery, it’s the way of life that brought you to live there in the first place; it is the ease of hopping on your bike at your front door and riding first class trails on your lunch break;  it’s the little hole in the wall restaurants that you know and love; it’s the yearly events held in your town that you look forward to every year.

Be it the beginning of the holiday season , the nuances of the road finally taking their toll, or the gray clouds hanging low in the sky when we first ventured in to Ecuador, we found ourselves in need of a refresher.

Jed taking solace in a Budweiser

It was on this one said gray morning, two days in to Ecuador, on our way in to Quito, that we were feeling the stronghold of these longings of familiarity when we, without even realizing it, crossed over in to the southern hemishphere.  We double backed on the instinct that we may have just missed something, only to find ourselves directly in the middle of the world. 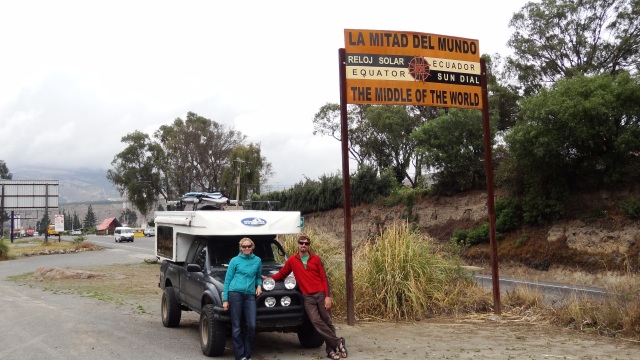 Middle of the world

There was a huge sun dial recently built in this location of an old Inca ruin, by who’s shadow you could read the time of day and year.  It was established by a non-profit group on the basis of educating visitors of it’s importance in the astronomical studies of the earth.  Those Incas were pretty smart people, but as it turns out they had the best tools for their studies, the Andes Mountains.

The sundial on the equator

If you took a globe and traced your finger around the equator, all the land you would hit would be flat except for the Andes Mountains in Ecuador.  These Mountians provided exact points of reference for the movement of the sun and stars as seen from earth throughout the year.  The Incas had built ceremonial grounds at each point in the mountains where the sun would first rise and set on the summer and winter solstice.

After our equatorial lesson we continued on towards Quito, the capital of Ecuador; our thoughts faded from the home town burrito shop to the pondering of earth and the stars and the civilizations before us.   We reached Quito ready to fulfill our quest of acquiring the tools needed to play in the Inca’s astronomical tool, the Andes.  Directly after entering the city we derived from the large percentage of people in yellow uniforms and the billboards outside of bars boasting the large televisions and drink specials that Ecuador had a big futbol game that day.  However it was only after the fifth hotel that we had inquired in, asked if Jed was Chilean, that we came to the realization that the game was actually here in town!

Playing soccer competitively for a large portion of my life, you could say that attending a famously large South American soccer match was on the top of my tick list for this trip.  I had planned to seek the games out and guide our travels towards them, yet here we were, stumbled unknowingly upon a world cup qualifier between Chile and Ecuador.

With no time to spare, we threw our bags in the hotel, and not having any yellow, threw on our blue hoodies (Ecaudor’s second color), hailed a taxi under the looming glare of the hotel clerk who had told us we had no chance of getting tickets today and headed off towards the stadium.  I mentioned to the cab driver that we were looking for tickets whom met this statement with the same positivity as the hotel clerk.  Yet ten minutes later, standing in the middle of traffic, was a man scalping two tickets, two seats side by side, for $8 over the entry rate.  Sold!

Crowds before the stadium

At this point the taxi driver told us that we would be better off walking than sitting with him in traffic so we gave the man his $2 and joined the hourdes of yellow shirts descending upon the stadium.  After entering and finding our seats, just in time for the game to start, we took a look around and were instantly glad that we didn’t own any bright yellow shirts as we were smack dab in the middle of the Chilean section.  Lucky for us, blue is also their second color!

Whether his pleasing personality or his new fascination with looking Chilean, Jed switched hats all too easily, joining in with the Chilean crowd.  I held steadfast, feeling some loyalty to our surrounding city of luck, only maybe cheering a little quieter than I would have otherwise.  It was an exciting game, dominated by the Ecaudorians, clearly the better team, whom came out on top, 3-1. This didn’t cause any of the Chilean fan’s to hold back on their taunting and cheering though, and by the time the game was over the Chilean section was blocked off by cops who weren’t letting anyone through until all Ecaudorians had left the building.  Nevertheless, the Chileans, still loyally unfazed by their loss, continued  on with their chants, Chi Chi Chi – Le Le Le, Chi-Le, Chi-Le, inticing the the throwing of beers and other unanimous objects by the yellow shirts.  When one yellow shirt jumped threw the cops right in front of us to have his go at one of the Chileans and then was pulled out of the crowd and tackled to the pavement, all our loyalties were quickly lost except for one.  Jed pleads to the cop blocking our way, “We are Americans!  We are not Chileans! Please let us out!”  He listened to our pleas and let us duck out and run from the erupting crowd.

Out of the stadium, we were safe to reclaim our un-wavering passion for Ecuador and joined the city for some celebratory drinks in what we thought was our quiet little hotel neighborhood now turned madhouse.

Crawling in to bed that night, thouroughly exhausted with big grins on our faces, we looked back on our day and realized that it was exactly for days like today that we love to travel.  We wake up every day never knowing what exactly lays in store for us.  We can start off pouting over a breakfast of rice and Nescafe and be dancing with the locals in the streets by nightfall.

We emerged from our hotel that next afternoon, the clouds had finally lifted and the snow capped peak of Volcan Cotopaxi loomed in the distance over the ancient city streets like an open invitation, inviting us explore!

Jed and I set out April 2012 to drive from Wyoming to the southern tip of Argentina! Join us along the way to read about our adventures as we attempt to surf the coasts, climb the mountains and speak the language of the 15 countries we plan to visit!
View all posts by adventureamericas →
This entry was posted in Uncategorized. Bookmark the permalink.

1 Response to Crossing over the Hump