A Vacation from Vacation

Posted on August 29, 2012 by adventureamericas

We picked my mom up from the airport just outside San Jose with the intention of heading out to Lago Arenal, a beautiful lake just below one of the world’s most active

volcanoes, Volcan Arenal.  We had found a great little cabin to rent starting the following day and decided that we should go ahead and buy groceries while in the city and head that way.  So for my mom’s first cultural experience in Costa Rica we took her to a very unique market just down the road called Wal-Mart.

Once stocked up we took the winding roads westward out of the city.  Now before booking this trip my mom kept asking me about  whether she would want to be there in the rainy season.  Our reply was that it was fine.  We couldn’t see what the big deal was about rainy season.  In our experience thus far, as we had technically spent our whole time in Central America in the rainy season, was that a rainy day would be a few thirty minute showers here and there.  However on our drive out to the lake that night the world seemed determined to show me what rainy season was all about.  About an hour and half out, just about the time it was getting dark, it started pouring, and when I say pouring I mean there wasn’t a fast enough speed on our wind shield wipers.  After close to two hours of driving in rain, we sought out the closest hotel we could find.  The rain didn’t stop until the next morning.

Waking up the next morning, not really knowing where we were, we were pleasantly surprised to find ourselves at the base of the looming Arenal Volcano.  We relaxed with a nice breakfast before heading down the road to our new jungle bungalow. 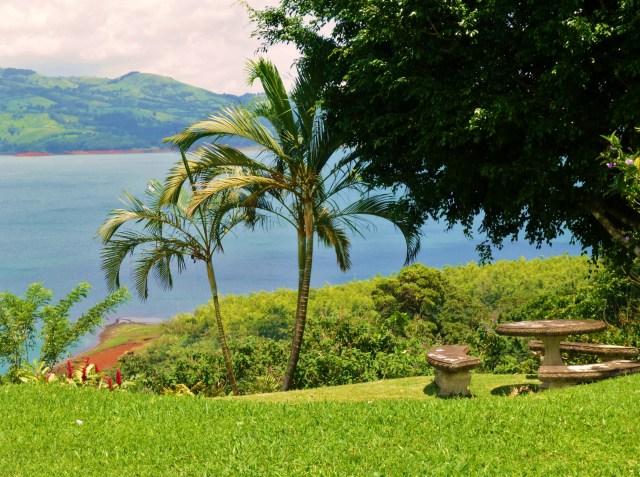 our view from the bungalow 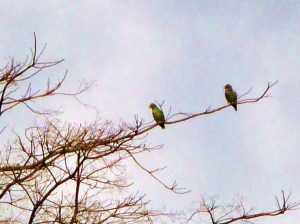 Green Parrots in our yard

This was a great little cabin and we spent the first day just relaxing and mellowing in to our vacation from vacation.  We hung out, drank some wine, read some books, spotted some exotic birds (Parrots and a Toucan),  and even managed to get a few chores done. Jed and I were especially excited about the use of a washer and dryer after hand washing clothes for the last couple months!

Thoroughly relaxed, we spent the next couple days exploring the area around us.  We went on beautiful hikes through the secondary forests/jungle surrounding the Volcano, we bathed in thermal rivers (outside the gates of the $70 Thermal pools) and according the the museum at the the Arenal Observatory lodge we took part in one of the most exptreme sports possible…Volcano watching.

Get back in your cage Jed!

After four days,we decided it was time to head to the coast and to get there we would take the scenic drive through the Monte Verde Cloud Forest.  Scenic drive of course meant some good dirt road time, and because Jed and I had refused to leave our car behind in exchange for a rental with enough seats for all, Jed and I took turns being tossed around in the camper.

On our way to Monte Verde

The ferry over to the Nicoya Peninsula that evening was a nice reprieve from being in the truck and we all got to hang out together and take in the views before reaching the Peninsula at dusk and driving the hour or so more in the dark to tip to find a place to stay for the night.

View of the Nicoya Peninsula from the ferry

The next day we decided we wanted to  stay in the little town of Santa Teresa for the remainder of the time.  We found a complex owned by a Israeli ex-pat with small cabin rentals that served as our hidden oasis for the week and settled in to our beach living.

We spent a couple relaxing days at the beach simply hanging out in hammocks and reading books, going for swims and walks, and playing on our new slackline freshly delivered to us from the States.

Big Iguana on the beach!

Momma D relaxing in the hammock

We had a day of playing in the mud after we mistakenly  chose the morning after an all night rain to drive over and hike to a nearby waterfall. This proved to be a treacherous approach in the muddy, rocky river and slick, steep, wet, root filled trail.   And when we got lost and took a hardly traveled road on the way back to Santa Teresa we got to take my mom on a good four wheeling adventure, but lucky for us she was there to point out all the holes and rocks. 😉

We dined at beach side restaurants for lunch and upon the advice of a local, who came by to try our slackline, we drove to the end of the road bought fresh fish, barely off the boats, for our dinners.

Sunset walk on the beach with mom

On our last day on the peninsula we decided to do the organized snorkeling trip that was being offered by various outfitters all over town.  This being touristy Costa Rica I suppose I was imagining that this tour would be a little more organized  than you would expect if you took a tour in the rest of Central America.  However while we were standing on the beach watching the boats try to race the crashing waves in and out of the cove in an effort to pick us up with out getting smashed, I realised that, “Yes, this is still a Central American operation”.

They took us to a beautiful island surrounded by very blue sea and dropped us off.  About 10 minutes after arrival the rest of the snorkeling tours in the country arrived.  There was no snorkeling directly around this island.  They were going to split up up and take us in turns out to another island.  So after we hung out on the beach and people watched for about two hours it was our turn.  We hopped back on the boat and they took us near a small rock island and told us we had 30 minutes.  At first I was upset that we were only going to get thirty minutes after paying for a full-day snorkeling trip, but after 15 minutes of being in the water following around the same school of fish and trying to avoind being slammed in to the rock island I (and the rest of the group) were back on the boat. 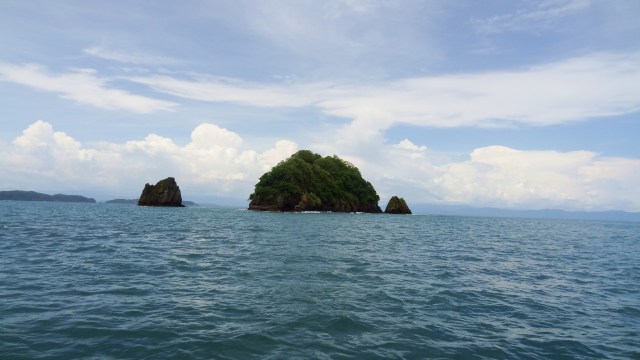 The small one on the left was the snorkeling island

So, the snorkeling trip didn’t turn out to be much of a snorkeling trip, but it was a nice day in a beautiful spot and on the ride back to the Peninsula we spotted two humpback whales.  This alone made the whole tour worth it.  I had never been that close to whales in the wild before.  You know that they are huge, but when you see one in that setting and it’s truly grandeur size, it still blows you away.

Our two weeks together had come to an end. It was a wonderful break from our dirtbag traveling, but most of all it was wonderful to spend time with family after 5 months of traveling .  Through out our trip, while witnessing other’s cultures, we spend a lot of time looking at our own lives and evaluating what matters most and getting to spend quality time with family couldn’t be higher on the list.

We dropped my mom off at the airport with tears in our eyes mostly for knowing we wouldn’t see each other again for a while, but also partly for knowing we were directly heading towards our only dreaded adventure of the trip… shipping our car to Colombia!

Jed and I set out April 2012 to drive from Wyoming to the southern tip of Argentina! Join us along the way to read about our adventures as we attempt to surf the coasts, climb the mountains and speak the language of the 15 countries we plan to visit!
View all posts by adventureamericas →
This entry was posted in Uncategorized. Bookmark the permalink.

3 Responses to A Vacation from Vacation